Despite the ever lengthening list of new and exciting plants I have come across over the last few weeks  that I would positively love to look into further for future installments, I decided to not let myself get too carried away. As such, for the 5th installment of Plant of the Week I am going to focus on a species that has been a favorite of mine for the many, many years that I have had the pleasure of having it carefully stored away within my botanical mind palace. If you two have not met already then allow me introduce you to the positively lovely yet rough and tough Rosa rugosa.

More often known as either the rugged rose or Ramanas rose, Rosa rugosa is a fairly common ornamental throughout southern Canada that is often overshadowed by other more popular or charismatic members of the extraordinarily diverse Rosa genus. Roses certainly boast some of the most impressive examples of plant breeding and bloom diversity in the horticultural world, having garnered generations of dedicated followers all over the world to show for it. This however should not take away from the merit and inherent value of the rugged rose, for many rose cultivars or species can hardly be described as both handsome and functional. It is in both of these departments that Rosa rugosa truly shines.

Also known by some as the beach rose or salt-spray rose, this vigorous suckering shrub is indigenous to east Asia including Japan, Korea and parts of China where it originally made it’s home among coastal sand dunes or gravelly beaches along the ocean side. Despite living among aggressive thickets of rhizomatous grasses in extraordinarily poor soil and being buffeted by nearly continuous salty winds, this rose flourishes despite these harsh and foreboding conditions that most other roses, and certainly many plants in general, could not possibly tolerate. It is because of this exceptional degree of hardiness for hostility that brought Rosa rugosa to North America and why it was recruited for and continued to endure the whims of city life.

This rose was positively made for life in the concrete jungle. Tolerance of summer heat, drought, winter cold, snow, exposure to wind and rain, poor soils, road salt as well as airborne and soil borne pollution has permitted Rosa rugosa to not only become a prominent feature in residential landscaping and parks but also outside of shopping malls in concrete planters and tiny islands in the middle of parking lots. In addition to thriving within these conditions, the rugged rose puts on a modest yet still beautiful display during the summer as it produces fragrant, 5-petaled pink or white blossoms near the ends of the stalk.

The leaves of Rosa rugosa are born in pinnate pairs of 7-9 with impressed veins and a scalloped margin that grow alternatively on the stalk. Especially when young, the foliage, stems and twigs are quite soft and to the touch, but as the plant matures and the new growth hardens some of these hairs become stiff, recurved spines that are slimmer than the broad, hooked barbs of other rose species but can still cause injury to flesh or clothing. The dense foliage during summer hides the form and architecture of this multi-stemmed shrub which rounds out anywhere from 3-6 feet in height and often just as wide.

At ground level near the base of the plant, suckering shoots are produced in mid-summer as the bole of the plant becomes ever wider, seeking to expand and cover more ground. These shoots, when only few inches tall and the spines are still tender can be cut just below the surface of the soil and either steamed, boiled or fried similar to asparagus. They have quite a mild, agreeable flavor that is excellent served with the traditional base pairings of butter or oil and salt. These shoots can also be severed from the main root system and planted in another location as a manner of propagation. 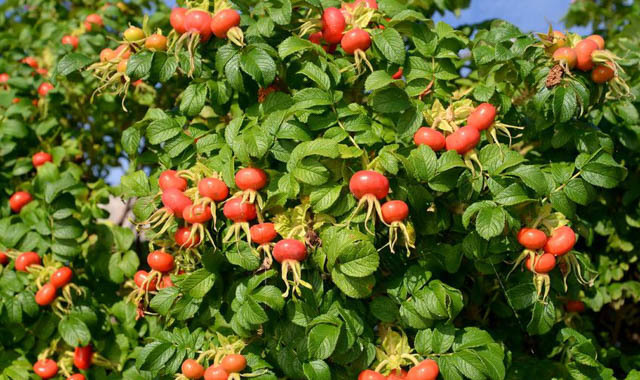 The petals from the unsophisticated yet undeniably pretty flowers, which are produced in mid-summer, can be picked and used to garnish salads, soups or combined with other ingredients in jams, jellies or preserves. Often it is recommended that the white base of the petals (nearly indistinguishable on the white flowering variety of this species) is removed as it can impart a bitter flavor to concoctions. If the first flush of flowers are almost entirely removed from the plant (just like deadheading many annual ornamental plants) this will encourage Rosa rugosa to produce another flush of blossoms in about a month which can then be used again.

It is important to note that this second flush of flowers will likely not have enough time left before the weather turns cold to fully mature into fruit, if that is what you desire. After the blossoms have been pollinated and the ovary of the blossom begins to swell, the slightly wilted but still completely edible petals can be removed without sacrificing the production of fruit. The fruit, or ‘hips’ of Rosa rugosa are noticeably large and have quite a thick layer of sweet, delicious flesh when compared with other species. Their large size and abundance of flesh makes them a favorite for gardeners or foragers who are especially interested in using the fruit.

The fruits, when brightly colored and soft, can be eaten as a delectable treat directly off of the plants in late summer or early autumn. The hips are of better quality in wetter years or during the autumn when the rains come, the temperatures drop and a few light frosts have made the flesh even more tender. Fruit of reasonably quality can even be found well into the winter in some milder regions of Canada. Alternatively, the hips can be either steamed or boiled, mashed and strained to make sauces, jams, jellies (with the addition of pectin) or chutneys. The seeds inside of the fruit can be cleaned (as they are covered in small, nearly translucent hairs which can tickle your throat) and ground into a powder which can be added to various baked goods, soups or stews as a nutritionally supplement due to their high in vitamin E.

Lastly, Rosa rugosa can be added to your garden or edible / medicinal landscape in a number of ways, as well as being encountered throughout many cities as well as in feral situations in suitable environments. Although not as tolerant of heavy pruning as many other rose species, they can be gently shaped into hedges along garden borders or allowed to grow into a large, sprawling shrub as s specimen planting (which is what they definitely prefer to do). It is also not uncommon in parts of the north eastern United States and Canada to find these roses in meadows, along woodland borders and also as sprawling shrubs creeping over the sand adjacent to lake shores, inland seas or oceans as they do in their native habitat.