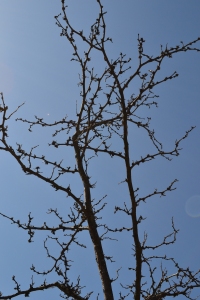 This art-time has been a long time coming, and I’m glad that I have finally decided to spend some time focusing on it. I have wanted very much to be an active participator in the relished cultural experience of Hamilton’s Art Crawl. In case you aren’t from around these parts or prefer to live a culture-less and homogenized existence keeping almost entirely to yourself, Art Crawl is a free public event where artists, vendors and the general public come together to meet and greet, purchase some artwork, listen to some live music and enjoy the extended pub and restaurant hours which all help to make Art Crawl a characteristic and highly specialized aspect of what it means to live, or visit, Hamilton. Artists of any shape or form can rent galleries, set up TV dinner style tray tables on the side of the walkway with art draped all over it or any other conceivable option in between: it’s completely free game and a beautiful non-discriminatory environment. Whether you are a touring artist sponsored by institutions with huge grants, or someone like myself that wants to see how the public reacts to some experimental art pieces, Art Crawl is there with open arms to welcome you into the experience.

Late last year (sometime in either October or November, I honestly cannot remember for the life of me) I decided to take some photos of the leafless, bare branches of some trees to paint. My intention was to photograph the trees, use some image altering software (in this case Gimp, which is basically a Adobe photoshop clone that is completely free for anyone that uses Linux) to enhance the silhouettes, re-size the images and eliminate the background, print the images out on transparent plastic overhead sheets and project the images onto 16′ x 20′ canvases. I plan on painting in the background on each canvas (there are 8 or 9 paintings that I would like to create, each of a different individual tree) a different light, dreamy sort of pastel color, possibly with blending light and dark patches, and then paint the stark black silhouette of the tree over top.

The trees that I selected to feature for this collection, hopefully the start of many more collections following a similar theme, were honey-locusts, Gleditsia triacanthos. Despite the unusual sounding name (this tree has little if anything to do with locusts or honey), guaranteed if you live in eastern North America you probably see more of these trees on a regular basis than almost any other species. They are one of the most commonly planted street trees: able to tolerate soil compaction, confined spaces, road salt, air pollution, infertile soil, -20° C weather for weeks on end during the winter and sweltering humidity in the summer. For these reasons among others (they also seem to be able to tolerate growing out of what appears to be layers upon layers of cigarette butts in various states of decomposition) they are planted in groups or in neat little rows in parking lots, boulevards, front lawns, strip malls and in front of fast food joints. It’s hard to walk down a block, anywhere around here, and not see at least one young or old honey locust.

The species is native to central and eastern North America, including southern Ontario, but only in a few scattered sections of the province. However, we have decide that we like the honey-locust so much as a horticultural and landscaping feature that we have spread it far beyond the way in which it had dispersed itself before humans intervened. In the wild, these trees are covered with compound thorns several inches long and several centimeters thick which emerge in vicious clusters directly from the trunk, limbs and even the smallest twigs. You might not understand why such a diabolical and menacing looking tree as a wild honey-locust would have any place in the city where such thorns would seem to cause obvious problems, but nearly all the trees in urban or sub-urban situations are thorn-less. This is because a single variety was developed decades ago, Gleditsia triacanthos var. inermis (triacanthos means triple-armed or triple thorn, inermis means unarmed or thorn-less)  which is a single male tree that was discovered that did not bear thorns. 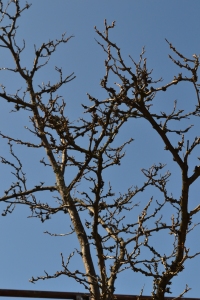 This thorn-less feature of the otherwise violently armored honey-locust was a breakthrough, because otherwise the trees cast light shade, do not suffer from many fatal diseases and once established are drought resistant and virtually care-free. Although it is a rare mutation, cuttings of this ‘safe’ original tree are grafted onto the root stalks of other honey-locusts so that they inherent the thorn-less attributes of the original. This allowed this feature to be widely transfered to thousands and thousands of other trees which were then sold across the continent and can be found in almost any town in North America, likely elsewhere around the world as well. Occasionally, there are some rebellious individual trees that somehow regain the ability to grow thorns, or change gender to become female, either from further mutations or from root suckers that replace the grafted portion of the tree that may have died or been broken off by rogue hooligans. This is very interesting to observe, but does not happen very often.

These particular honey-locusts which I photographed for this collection of acrylic paintings can be found growing out of inhumanely small boxes of dirt surrounding by pavement in groups in front of the Hamilton GO Station between Hunter and John and Hunter and James trees. Although small, the nature of their living conditions has stunted their growth, preventing them from growing beyond the confines of their inescapable concrete prison. Years or storms, howling winds, unknown physical abuse and other unknown circumstances, these particular trees demonstrate that life is not always easy. They struggle to fight the inevitable infiltration of death in the form of beautifully sculpted twisted and ragged limbs, immortalizing the act of defiance and the simple will to live at all costs. Over the next week or so I am going to continue editing the photographs to prepare them to be projected onto canvases. Stay tuned, friends, for the next developments in this almost forgotten art-time.